‘Be yourself online … or suffer the consequences,’ I advised in a piece on The Vue Post as far back as 2011, and I do as I counsel others:

“My advice to you is to be true to yourself, be proud and honest about the matters that are important to you and don’t ‘manufacture’ what you may consider to be an ‘acceptable’ image for yourself on social media. Doing so will eventually catch up with you!”

The pillars of my personal, secular humanist value system are: authenticity, common decency, human dignity, fairness, integrity, and the pursuit of knowledge and understanding through science and education.

Issues that matter to me

As a former asylum seeker and political refugee, I feel a strong affinity with asylum seekers. I empathise with the plight of refugees, and see a global humanitarian failure when it comes to assisting those in dire need, especially in the midst of the worst refugee crisis since World War II.

I consider bigotry, homophobia, misogyny, racism, and sexism the manifestations of the worst aspects of human nature – aspects that diminish our humanity, and hold social progress to ransom.

They represent abhorrent views, and are antithetical to a civilised, liberal and progressive society, but our response must be moderated and responsible.

While we must not permit such views to limit, or hold back, social progress, the only legitimate methods of dealing with people holding such socially unacceptable views are education and persuasion, because no one is born a bigot, a homophobe, a misogynist, a racist or a sexist – they are all learned cultural and societal behaviours.

We should also always be overly cautious as to what types of behaviours or views we declare ‘socially unacceptable,’ because there is no tyranny like the tyranny of the majority.

Although I have no children, and no intention to have children, I am still concerned about the future of our planet and humanity, and consider the threat represented by climate change a very real and serious matter.

I accept the conclusions of eminent, learned scientists, and the findings of consensus climate science, telling us the Earth is warming, our climate is changing, and that human activity is a leading cause of the current changes observed to our climate system.

I consider our lack of substantive climate action a failure of conscience, and a betrayal of future generations, and our species.

Clean, renewable energy is the future of humanity, and will contribute to our long-term survival.

Freedom of speech is fundamental to healthy liberal, progressive and secular democracies.

While there are so-called ‘absolute rights’, freedom of speech is a right that must have some ‘limitations,’ or responsibilities attached, even if some see such a position hypocritical and intellectually flawed, and question where such a line could be drawn.

The ‘limitations’ are necessitated by human nature itself, in order to protect the exercise of the freedom, and to protect it from being co-opted by hate.

Informed debates, the discussion of ideas and concepts and challenging the status quo without fear, are indispensable to human existence and progress.

However, any speech that calls for, incites, or supports physical violence, or reasonable fear of physical violence, especially in response to someone else exercising their right of free speech, is unacceptable. Such speech is inherently antithetical to the very concept of freedom of speech.

Whether speech calling for discrimination or exclusion, infused with bigotry, hatred and prejudice, such as homophobia, misogyny or racism (but falling short of calling for, inciting, or supporting physical violence, or reasonable fear of physical violence), should be allowed is a vexed issue.

I stand firm for informed debates on issues, but would submit that bigotry, hatred and prejudice by their nature lack the ‘informed’ component.

An ‘opinion’ in the absence of evidence and facts to support it is usually nothing more than bigotry, hatred and prejudice and consequently it is arguable that no one is entitled to an opinion, especially when the opinion in question has no foundation in facts, or has been conclusively and inarguably debunked.

In my view, you are only ‘entitled’ to what you can coherently argue and factually support.

In this formulation, I do not imply, for instance, that we should always suppress the utterance of intolerant philosophies; as long as we can counter them by rational argument and keep them in check by public opinion, suppression would certainly be unwise. But we should claim the right to suppress them if necessary even by force; for it may easily turn out that they are not prepared to meet us on the level of rational argument, but begin by denouncing all argument; they may forbid their followers to listen to rational argument, because it is deceptive, and teach them to answer arguments by the use of their fists or pistols. We should therefore claim, in the name of tolerance, the right not to tolerate the intolerant.
The open society and its enemies, Vol. 1, Karl Popper (1945)

I support and defend the right of people of faith to observe their religious beliefs. I understand religion provides comfort, and gives strength, to millions around the world. While religion can be misused, and people’s faith manipulated, I believe most religious people are good, and have honourable intentions.

However, in a secular, liberal democracy religious freedom cannot be an unfettered, absolute right:

Religious institutions must observe the separation of church and state, and abstain from interfering in politics and public policy. Only public policy:

Such policies will arguably also always satisfy the fundamental principles of religious faith, without importing the prejudices developed and retained by their institutions over the centuries.

As a lawyer, I am under a professional obligation not just to obey the law, but also to ensure the efficient and proper administration of justice, and to serve the best interests of the community.

To me, this means an obligation to speak out against, and work to change, laws that allow unjustifiable breaches of human rights, and cause injustices. 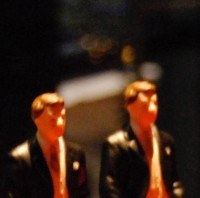 I am a gay man and I have been in a loving, same-sex relationship with my partner since 1998. I campaigned for marriage equality, and my partner and I married in December 2018, on our 20th anniversary.

Now that marriage equality has been legislated in Australia, I will continue to defend that right and reject the bigoted, and often downright malicious, arguments made against marriage equality during the 2017 Australian Marriage Law Postal Survey campaign. I found the fear-mongering about the ‘consequences’ of legal equality by opponents of marriage equality intellectually and morally bankrupt.

Subject to my general comments on religion above, I also rejected the need for the so-called ‘Religious Freedom Review‘, announced by then Prime Minister, the Hon Malcolm Turnbull MP, on 22 November 2017, to inquire into ‘whether Australian law adequately protects the human right to freedom of religion’.

My personal submission to the Review sets out my objections in detail. I note the Review made a range of recommendations for reform, but effectively concluded there were no significant concerns surrounding religious freedom in Australia. Consequently, I also categorically reject the need for the Government’s proposed Religious Discrimination Act.

I #love #olives and #OliveOil, and one of my #favourite #guilty #pleasures had become #enjoying these #stunning #seasonal, limited edition, #new #harvest #olive #oils each year (always around May), the ‘First Harvest’ #cold pressed extra virgin olive #oil from @CobramEstate, and the ‘Novello’ unfiltered first pressed extra virgin olive oil from @PukaraEstate … #amazing, #unique #WorldClass #local #produce.
It was such a #stunning #sunny, warm #Sydney #autumn day today, it called for a long, #lazy #lunch by the water …
#Fabulous #NightIn with a #rustic #OldSchool #dinner of #German #bread #dumplings made of #sourdough, #onion sautéed in #butter, #parsley, and #eggs, accompanied with a rich #beef and #mushroom #stew and served with #SourCream …
The #art of the #long #lunch at @DunbarHouseWatsonsBay … grab a seat on the #terrace and enjoy #delicous #food and the #tranquility of #WatsonsBay with #views across #SydneyHarbour.